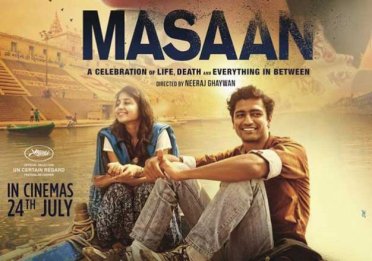 I write this post a day after watching Masaan; not because I needed time to overcome the emotional impact of the movie to analyse it more objectively, but for the evocative poetry that renders each and every strand of emotion in the film, endearing (and that had me looking up the poets on the internet). Poetry not just of the great Urdu poets – Brij Narayan Chakbast, Dushyant Kumar, Bashir Badr – that were used in the film, but also of Varun Grover’s soul-strumming lyrics: he has deftly woven his passionate words around that marvel of a line by Dushyant Kumar – Tu kisi rail si guzarti hai, main kisi pul sa thartharaata hoon  (O, how I shudder like a bridge when, like a train, you rumble by).

The simile becomes all the more potent in the film with the romance between Deepak (Vicky Kaushal) and Shaalu (Shweta Tripathi). The great social and cultural divide that pose as a certain impediment to the joyous union of the lovers – caste – stands as one of the many symbols of the undying tradition that spawned along the banks of the river Ganga thousands of years ago.  Deepak belongs to the Dom community while Shaalu is from a higher rung of the caste ladder. Coming from a completely different background, Deepak, otherwise confident, is apprehensive of the perky, poetry-reciting Shaalu. The conversations between them, which have been realised in a very convincing manner, reiterate the cultural gorge between them.

The closest that Deepak comes to poetry is through songs – he makes a mash-up of popular Hindi film songs and lines of the great poets (mentioned above) and gifts Shaalu on her birthday. This is perhaps one of the first attempts in the film to bring about a happy marriage of the traditional and the new way of life(one of the prominent themes of the film is the conflict between the old and the new).

The music by Indian Ocean hits all the right chords. Coming from the masters of fusion rock, the music adds to the theme of the film. The sufiyana depth of the lyrics and the bold, in-your-face rhythm of rock music is apparent in all the three songs in the movie. The lyrics of Varun Grover weaves mystic and the worldly into one and that too so enchantingly that it becomes difficult to imagine the movie without the songs. In an age when the voice and intent of movies and their songs have grown so apart, the songs of Masaan restores faith in the necessity of songs in movies.

I just came across a post on Firstpost where Varun Grover has ‘decoded’ two of his songs –Mann kasturi  and Tu kisi rail si. Hum the tune and ponder on the beauty of the lyrics. Click here.

Also, tell me what is your favourite line from the songs in the comments section below, mine is – Main hoon paani ke bulbule jaisa / Tujhe sochoon toh phoot jaata hoon.

3 thoughts on “The Poetry of ‘Masaan’”